43 photos
The furnaces smelted iron ore for the nearby steel mills. They were built in 1907 and operated until 1978. They are 92 feet in height and constructed of 2.5 inch thick steel plate and refractory brick. They were abandoned because of their inefficiency (they consumed approximately 4 tons of raw materials — iron ore, coke and limestone — for every one ton of iron produced) and the general decline of the steel industry in the Pittsburg area. They are situated along the Monongahela River because their cooling system consumed 5 million gallons of water per day. Their peak production was in the 1950s - 1960s when they produced 1000 - 1250 tons of iron per day.
Interestingly, the furnaces were located across the river from the steel mill. The molten iron was channeled into special rail cars and transported across the river to the mill.
The ore was heated by hot air. I assume this was to insure that all surfaces of the raw “rock” were efficiently heated. The hot air was produced separately by burning coal.
Fortunately, various non profit organizations are trying to preserve the furnaces as a historical monument of the 20th century industrial age.
The images in this portfolio were obtained in the fall of 2013 and include both ground level and images captured from the highest “cat walks” that reached the top of the stacks. The camera and lenses were a Leica S2 medium format camera.
Prints are available. Email: [email protected]
Enjoy!
© Rudlin Fine Art 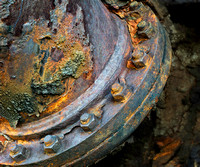