Lorton State Maximum Security Prison.
In 1908, President Roosevelt demanded an investigation of the deplorable conditions in the Washington, DC, jail and reformatory. In 1916, Congress allocated funds to build a new facility to be located on the Occoquan River, in Fairfax County, Va.

The reformatory section was to have "dorms" rather than cell blocks. There were "cafeterias" for the inmates, and courtyards. The bricks for the buildings were manufactured on site. The prisoner's constructed the buildings.

Much later, a maximum security prison was also built with traditional cell blocks and surrounded by a high wall with guard towers.

Between the dorms of the reformatory and two of the maximum security cell blocks were paved basketball courts. I can imagine the ferocity of the competition and suspect fouls were seldom called!
Categories & Keywords
Category:
Subcategory:
Subcategory Detail:
Keywords:
© Rudlin Fine Art 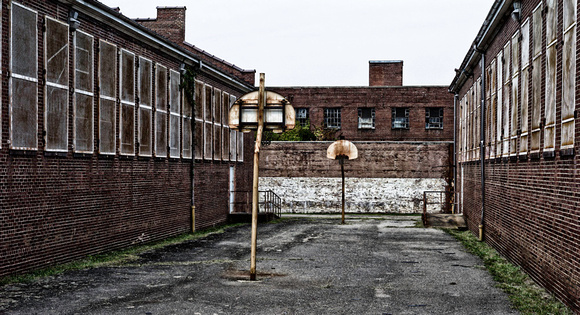