Eastern State Penitentiary , Philadelphia, Pa.ESP is a national historic landmark, built in the 1820s, it was the first penitentiary. It was designed so that each inmate had his own cell. Each cell had a single small window in the wall and ceiling situated such that "God's rays would shine upon the prisoner and help him repent." Most of the prison is now in disrepair.I noticed this stool highlighted, as described, with "God's rays" and could indeed feel the solitude and reflection.

Here the cell door has been removed and placed into the cell. The cells, indeed most of the prison walls, were apparently painted at one time a shade of green. I find it hard to believe that this was conducive to "contemplation and repentance" .
Categories & Keywords
Category:
Subcategory:
Subcategory Detail:
Keywords:
© Rudlin Fine Art 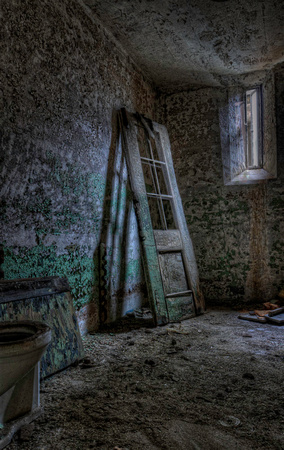